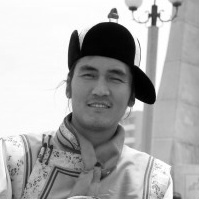 Jambalsuren Zolbayar, commonly known as Amai (his artist name) was born on June 28th, 1979 in Ulaanbaatar, Mongolia, during the communist time into an intellectual elite family (his father is a university teacher and his mother is an economist). He grew up in Ulaanbaatar however soon the family moved to the Soviet Union to the city of Irkutsk because of his father`s work. There he studied in a Soviet school for four years until the age of twelve, learning the Russian language and culture from very early on. After communism collapsed and relations between the two countries died down, the family had to return to Mongolia.

In 1991 Amai entered the very elitist high school N°23. This was the time when the iron curtain fell, after 70 years of ideological brainwash and communist autarky, letting him discover Western culture with the greatest interest and enthusiasm. During the same time he watched his homeland spiraling down endlessly into an economic and political crisis. He and most Mongols got blinded by the glittering lights of New York, Tokyo and Paris, forgetting about Mongolia`s rich heritage.

After having graduated from high school in 1997 and upon realizing Mongolia`s backwardness in comparison to other more modern and developed nations, Amai became an avant-garde artist and musician, promoting electro music and thereby giving the youth, Mongolia`s lost generation, a chance to see the world with different eyes.

At the same time while both working at Andrew Style FM, the Mongolian-based Mongolian-Ukrainian radio station as well as managing the UFO Nightclub in Ulaanbaatar, Amai studied at the Mongolian National University where he graduated with a Bachelor of Foreign Affairs in Japanese Studies. Soon after, he enrolled in the Academy of Business and Administration of Mongolia and the Mongolian University of Culture.

Amai was able to fully express himself by means of the progressively managed studio he created with the help of family investments. His goal was to promote new movements through music, video, design, events and other forms of expression to open the mind of the “lost generation” he once belonged to as well.

In 2001, Amai laid the foundation for the “Club 21” movement with the goal to unify all people who liked electro music. His idea was not only to promote the vibrant electro music culture but to go far, further and beyond and bring more ideas from abroad, not to simply copy and follow, but to understand, learn and create.
“Club 21” organized several well-known PR events involving and uniting Mongolia’s leading musicians, bands, DJ`s and models. Thus in 2005, Amai was nominated as “Best Event Promoter” because of his thoughtful ideas and innovative projects.

Further on, Amai went into production and started to produce the TV program “Club 21”. The idea behind this project was to show to Mongol people the most intriguing clubs, parties and fashion trends to be found throughout the world.
Shootings took place in cities like Singapore, Tokyo, Moscow and Chicago. The programs were edited for broadcast but the project was quickly stopped by censorship after its first broadcast because Mongolian society was not ready to accept what they interpreted as the promotion of alcoholism and bad morals.

Amai composed and released three albums: “I Love You” (2002), “Who Am I” (2003) and “Indigo” (2005).  The latter of which was available for free download on Internet to underline that artist are not merchants.
Through the electro music culture Amai learned more about modern Western culture and experimented with several fusions of the two totally different cultures to create something new.

For him it has been the only way to prevent ancestral cultures from disappearing under the pressure of globalization. Furthermore, Amai believes that this is also a way to make the world understand and feel Mongolia and see it in a different light.